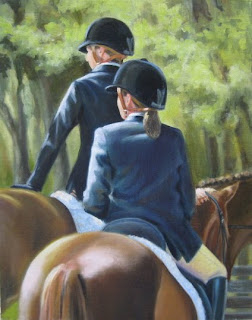 Shown here is my painting entitled "Sisters", an 11 x 14 Oil on canvas. It's headed out to Memphis and Artreach Gallery in Germantown for their "Horse Country" art show. This event coincides with the Germantown Charity Horse Show and celebrates not only equine subjects, but the country landscape as well. "Alias", "Just an Itch", and "Heels Down" will also be making the trip to west Tennessee. The show will be hanging through most of the month of June.
Posted by JPJ at 5:06 AM 3 comments: 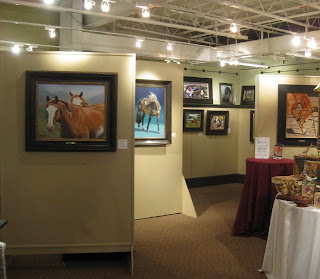 Last night was the opening for my Solo Show at Belle Meade Plantation in Nashville.
Considering the fact that we are experiencing the devastation of a "1000" year flood....well....some die hard people showed up and it was a very pleasant evening shared with old friends and new!

Belle Meade Plantation itself was very lucky to be on high enough ground that it did not suffer terrible damage. Yes, the basement was flooded a bit but I was told that it is a managable problem and they are thankful because it could have been so much worse. The roads surrounding the Plantation left it like an island last weekend. So many are suffering in the area from the aftermath of last week's storm. Nashville is an awesome community and we are coming together to help those of us who really lost so very much. Personally, our home was spared, but many friends homes were not. It is overwhelming..... but it just takes one step at a time..... Nasvhille could really use your prayers for quite a while.
Posted by JPJ at 6:49 AM No comments: